How to turn your teenagers into savvy investors 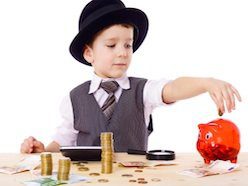 One of the greatest sources of pride for a parent is to teach their children a lifelong skill.

And seeing that parents spend so much time, money and energy protecting their children, educating them, ferrying them to sport or dance classes, there is one blindingly obvious thing I have often pondered.

Why do parents spend so little time teaching their kids money and investment skills?

Perhaps, and maybe this is also obvious, the parents doubt their own abilities in these matters. In many families, I know, there is an inherited problem in that money issues are barely discussed – not the income of the household, the expenses or the net worth.

Granted, idle playground gossip is a risk you run by letting the kids in on too much information (a little like employees, where the boss’s tactic is never to let the staff compare salaries).

But surely if you want to protect your children, and their assets, then the sooner you teach them the merits of compound returns, the advantages and dangers of debt and the need for investments with cash flow the better off you and they will be.

Let’s assume the interest rate (or dividend rate, even better) is a constant 4% – which you will now get from many cheap index funds or exchange-traded funds – then at age 65 the person will have $1.17 million.

Here I am being very conservative, only accounting for the income – not the increase in the capital value. If I assume an average 4% capital growth as well (still conservative) that figure would jump to $2.83 million.

Just one small question … if you waved that sort of maths under the nose of even a non-numerate teenager, do you imagine they might listen – even if for a few moments?

Now take a person whose parents decided not to encourage them to save, and who only came upon the idea themselves later in life when their income picked up. Here I’m assuming they start saving around $200 a week from the age of 30. Using the 4% return, they end up with around $776,000 – or about $394,000 less than the person whose savings started earlier.

If I add 4% capital growth to that equation, the 30-year-old ends up with $1.87 million. It’s certainly still worth having but the compounding effect has not had as long to work. It’s close on $1 million short of the family and the kids who started salting away the money much earlier.

The other education I think parents and kids should engage in is to invest through their kids’ eyes. A younger person might have spotted Facebook as an investment before you.

Or Nintendo (Pokemon Go) or any one of the young fashionable labels that emerge from the pack while you are still listening to music from 20 years ago. Again, it might pique their interest that there’s money to be made by spotting trends early.

The truth is that all investment needs vision and imagination, along with the fundamentals of cash flow, yield and gearing. And understand that the motives for teaching these concepts to your children are not completely altruistic. The sooner a child can financially stand on their own two feet, the less likely it is that they will come and tap the bank of mum and dad, like so many are doing today.

Good for you … good for them